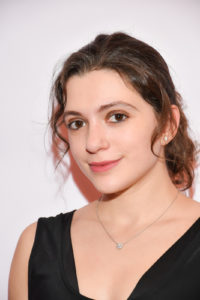 Dimitra is an independent filmmaker, international figure skater and singer. She is a lover of intercultural communication and is of Greek descent. Her Greek roots come from Sparta and Distomo. She is fluent in English, Greek, Spanish and is currently studying French.

She double majored at Loyola University Chicago in International Film & Media Production and Communication Studies with a minor in Spanish.

She is a competitive athlete who holds four national figure skating championship titles and is a three-time international medalist. She is a brand ambassador for Edea Skates and John Wilson Blades and was also a promotional model for Cirque Du Soleil’s show, Volta.

Dimitra is musically inclined and is trained in both classical piano and voice. She is a graduate of the Merit School of Music in Chicago where she sang as a member of the Merit Singers ensemble. She recently released her first EP as a singer this past November. “This Time of Year,” is available for download and streaming here. She also directed, produced and edited her debut music video for the track “Heaven Everywhere,” which was awarded Best Music Video at the 2019 Culver City Film Festival and was also an official selection at the 2020 California Women’s Film Festival in Santa Monica.

As much as Dimitra enjoys being in front of the camera she also loves showcasing her cinematography and post-production skills. Dimitra has worked on set as a 1st and 2nd AC (Assistant Camera) alongside American Film Institute (AFI) fellows on both short films as well as thesis films for the AFI Directing Workshop for Women (DWW) in Los Angeles. She has also worked as a freelance videographer and photographer for the Chicago Tribune Publication: RedEye Chicago, Hypno Cam (formerly known as Phhhoto), the Greek Heritage Society of Southern California and as a production assistant as well as an animator for Emmy Award-winning television director Greg Yaitanes.

As an independent filmmaker she directs, shoots, produces, and edits her own content. Her extensive resume includes documentary, music video, journalistic video, animation, commercials and narrative films. Some of her work is published under the name “Demetra Koris,” although she now goes by her artist name “Dimitra Korri.” Watch more samples of Dimitra’s work here.